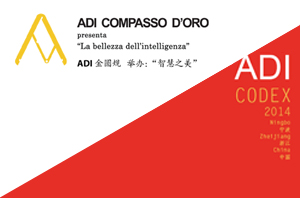 It opened on May 9 in Ningbo , ancient port city and today an important industrial center of the Chinese province of Zhejiang, ” La bellezza dell’ Intelligenza ” : an exhibition on the Compasso d’ Oro tells the story of the prize in thirty-four panels with photographs and text Chinese. It presents thirty pieces of historical collection selected by curator Enrico Morteo. During the exhibition , which will remain open for a month, will be offered free of charge to visitors a catalog ( with the graphic design of Daniele Ledda and Edda Bracchi, from studio xycomm ) with pictures of all the more than three hundred , including parts and career Awards , awarded from 1954 to 2011 , which highlights the images of the pieces in the exibition. The same day is also open , in a space adjacent to the Golden Compass room , another exhibition that presents the documents and materials collected by the office of the ADI Ningbo during the land monitoring conducted in view of the ADI Codex Ningbo 2014, the volume that accompanies the exhibition . “This hard work,” says Giovanni Cutolo , President of the Foundation ADI Collection Compasso d’Oro ” is the result of the commitment and perseverance of Davide Conti, who for nearly a year living in Ningbo, which has been able to overcome the many difficulties arising from language, chinese minded and above all by the widespread mixture of ignorance and skepticism of design”. With these two events concludes the first phase of the collaboration began in June of 2012 with an agreement between ADI and the Group of Ningbo Hefeng , sponsored by Dedalo Ningbo , a company that operates in the world of design, founded by Luigi Bracchi and Yanting Huang, who has a job of fitting and intermediation between Chinese companies and italian companies and designers