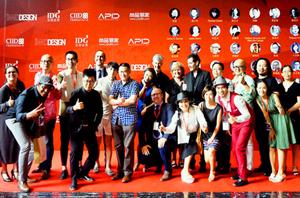 “Golden Creativity Award” organized the fourth edition of the “Golden-Creativity International Space Design Award” that was done in Beijing July 30, 2016. A prestigious award which was attended by over 1000 participants from over 15 countries in the world including France, Italy, America, Spain, Russia, Britain, Ukraine, Japan, Taiwan and Hong Kong and more than 40 city from all over China. The jury this year was chaired by Marie Rigaux (President of the French prize “InnoDesign Prize“) and also composed of; Michael C.Mitchell (President of MCM Design International Group USA, Hazem EI Khatibi (Vice President of APID professional interior design association in Dubai), Davide Conti (General Manager of ADI in China), Liang Jinghua (famous Hong Kong designer), Yu Lizhan (Professor at the Academy of fine arts of Tsinghua University), Peng Jun (President of Art institute in Tianjin), and Ma Kexin (Director of Art Academy in Luxun). The awards ceremony , which took inside of a prestigious hotel in the center of Beijing, has seen also involved the best media, magazines, press, VIP, brand and experts came from all over China.